A Study of a Study: Lifestyle Changes Add 14 Years your Life

The news headlines come out: 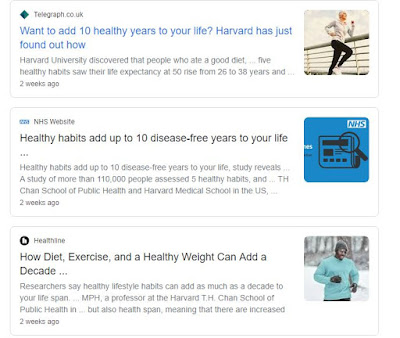 But what does this actually mean?

Where do these claims come from?

There are many studies that have headlines like this.

Here is the context that leads to the headlines:

So before getting much further into the guts of the study, we already have some more information:

According to the study, a low risk profile is someone who

Score 1 point if you meet a criteria, zero points if you do not.

You will get a number between 0 and 5, with 5 representing the lowest risk.

The study grouped a large number of people (we will talk about the study group later) into these 6 groupings.: 0-5.

In the paper they breakdown how much of the groups they studied fall into each score. 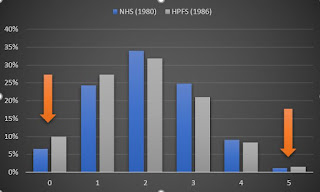 Let's think about the headline claim with this bit of information If the population they study is a good match for the rest of us (more on this later):


The graph below shows the gains in life expectancy by age. Each line represents getting one more point in your low-risk score. The difference between two lines at a given age is how much more life expectancy you get by lowering your risk. 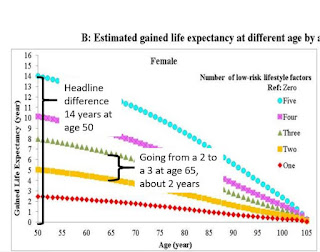 Should each risk factor be counted equally?

The researches did do a variant of this question. But to help quantify this, they used a tool called the 'hazard ratio'.  Under this metric, if groups were the same, the ratio would be 1.  A number less than one means there is less hazard.

The fives had a hazard ratio of 0.21 relative to the zeros. The hazard, in this case, is dying for any reason during the study period.  They studied other hazards as well, like cardiovascular disease and cancer.

The researchers group each risk factor into five groups (they must really enjoy the number five). And within a risk factor compared the rate of death of people within each subgroup.

A key point here is the idea of relative rates, each category has a different basis of reference.

How Do We Get From Relative Risk to Years of Life?

This is the magic sauce.  The hazards of death go to into something called a life table, from which we take the average number of years lived. It's all math.

Lower risk of death means more people will make it to more years of life.

The increase in life is mostly attributable to reduced risk in heart issues, a little bit from reduced cancer risk, and then everything else.

A lot of this stuff lines up with my Assumptions and Approaches post and Peter Attia's Studying Studies.

It is easy to be a critic and hard to be a researcher.

So after all this analysis, where does it leave us?

If you smoke, stop.  This is well known, but reaffirmed here.

Otherwise, eating more balanced meals and adding movement to your daily activities seems to have benefits that could result in tacking on a few more years to your life. To boil this down to a front page headline:

OVER AGE 50? INCREMENTAL GAINS IN LIFE EXPECTANCY MAY BE POSSIBLE WITH CHANGES TO FOOD AND ACTIVITY LEVELS.

The new headline may seem a bit watered down, but it is at least more honest in its impact and scope.

Have a better suggestion? What did you think of this analysis?